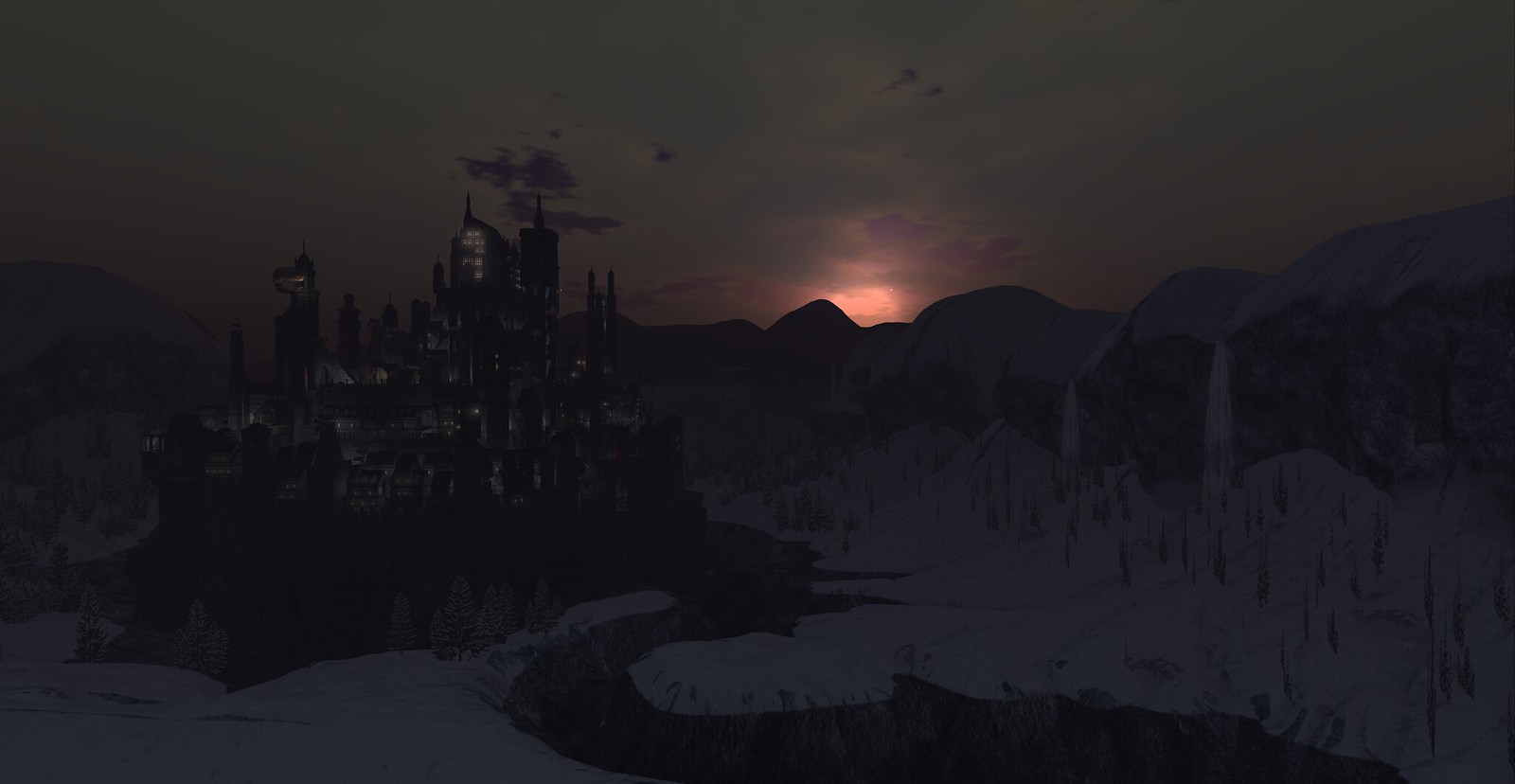 the city of Ystrad...legendary and mysterious, it is on the brink. People will tell you that only there can you live forever, that the lame can walk, the sick are cured and death has been banished. Shining bastion blessed by the Elder Gods....
not all rumours are lies but these miracles come at a price...
Join the Story...

while we are happy to have you live on the sim, there are some rules and policies that we ask you to follow/respect:

If you have any questions, don't hesitate to ask!

The yHud is a simple attachment to augment your roleplay in Ystrad. Please note: this is not a replacement or requirement for roleplay. It is here to enhance and allow for the randomness of dice rolling on a customized sheet. You do not have to build your sheet before beginning roleplay here; build it when you're ready!

It is command-driven, and the default channel is 9, so to communicate with it, use /9 from your chat window. You will note that no titler comes with our hud. This is done intentionally as I will not be allowing titlers on sim. At best, titlers are immersion breaking, ugly and lazy; at worst, they encourage metagaming. Ystrad was built with evolution, idealization, optimization and 'next-gen' appearance and roleplay stories in mind, let's leave the hover text behind!

This creates the initial character on the HUD. To set up a new character called Alice:

Note that all six base values can be customized: no lower than 15, no higher than 40 for a total of 180. each attribute is used to create your skills/health/stamina:
Intelligence
Perception
Endurance
Agility
Strength
Charisma

2. Commit it to the server

Once setup has been complete, committing (saving) the character is as simple as:

The HUD has a built in dice roller allowing you to roll against any of your available statistics, or a general die. The default die is a d100 but this can be changed to any die.

To roll against a stat (e.g. medicine):

This will roll against your medicine value. If you roll under this value, you have successfully passed the skill check. Above, and you fail. The HUD will notify you of the outcome

To load a character:

To set a default character(if you have multiple chars in the system):

To reset the script:

To get the build number of the HUD

To hide/show the information display:

In the world of Ystrad, it is only a matter of time till you run up against a tough situation which will demand you make every effort to survive. Combat ensues whenever two characters face off and begin assaulting one another. Remember that, while the actual scene may take awhile, the 'real' time of the encounter will have flowed more naturally and quickly. A good rule of thumb is that each turn accounts for roughly 10-30 seconds of 'real' time. I have broken down the combat into phases so you may better understand the flow of combat.

1. Initiative.
-Only roll this for groups of 3 or more if agreed upon, post order is the default. Each character involved will roll a d100(just /9 roll). Whoever scores the highest goes first, followed by the second and so on until the round is over. If two players roll the same number, they should reroll.

2. Make a contested roll.
-Players should post their attempted action then roll. If the attacker rolls successfully, the defender rolls to contest. If both players are successful, the higher roll wins. If one player succeeds and the other fails, the successful player wins the contested roll. If both fail, nothing happens. If a critical success is rolled on attack, the defender does not roll. If the defender rolls a critical then the attack is negated. If both players roll a critical success, they cancel each other out. This continues until all players have had their turn. It is very important to not jump post order during this time.

- If an attack is successful and the targeted player is injured:

4. Determining the Scene End
-If no one is defeated then the next turn begins following the same steps until a player breaks off from the combat (successfully escapes) or is defeated.

- Each day, you start with full hud health. This does not negate any injuries received prior to the reset, those should still be roleplayed out accordingly.

- For healing while in a combat scene:

Mojo set off an alarm and it doesn't take long for the guard to show up well armed.

Guard rolls his ranged skill(50) trying to take a shot at Mojo and rolls 42, a success.

Mojo rolls to dodge(30) and rolls a 22, a critical success. The guard fails to hit Mojo and Mojo dances a jig while laughing.

Mojo decides to use his own bow and fires back at the guard. He rolls a 56 against his ranged skill(60). The guard rolls an 8 against his survival skill(40) but Mojo rolled higher and scored a hit on the Guard.

The guard is lightly damaged by Mojo's shot and the round ends. A new round with a new set of actions will begin until one of them is either defeated or escapes.

These rules apply to all things Ystrad. Failure to familiarize yourself with the rules is not a valid excuse for violating them. Moderators will always try to issue warnings first when approaching potential rules violations. However, in-world and website/social media bans may be issued for blatant and repeat violations.

~No meta-gaming. Players may only use information that their characters have knowledge of through roleplay or other in-character means.

~ Respect fellow players limits, OOC bully will not be tolerated. If someone does not want to play something out due to feeling uncomfortable, they have a right to decline. Remember, this is a game, it is meant to be fun. When the fun stops, that is a problem

~ Griefing and trolling will be defined broadly and dealt with harshly

~ Roleplayers may expect to encounter foul language, sexual and/or controversial themes and violence. If you are uncomfortable with a situation, the burden is on you to remove yourself before it becomes an issue.

~ While this is an adult rated sim, we ask that you keep genitalia covered up and sexually themed interactions to their appropriate locations, and out of public areas.

~ We are not a BDSM/fetish sim. This includes any appearance, commentary, actions or roleplay that the admins designate as not fitting within the theme, lore or setting.

~ Private residences are Off Limits. Do not enter without the owner's expressed consent.

~ Keep OOC chatter to a minimum. Use ((double parentheses or brackets)) when speaking OOC'ly and please keep it short. Do not hinder other roleplayers. If you are unable to rp or must step away, an ((AFK)) or ((BRB)) is acceptable and welcome. If you must speak ooc'ly, please keep it to IM's

~ We are all adults here. Do not engage in a verbal fight or start a feud. If you have a problem with another player/group, attempt to resolve it diplomatically and without hostility. If you are unable to resolve the situation on your own, contact an admin.

~ Titlers are not allowed. They are immersion breaking and create powergaming potential. We are all wordsmiths of the highest caliber here, let's get rid of the hover text!

~ Rule breaking follows a 3 strike system. First incident will receive a warning. Second incident will result in a one week suspension. If a third incident occurs, players will be permanently removed from the sim. Please read the rules and respect your fellow players. We reserve the right to remove any player at any time if deemed necessary

~ Follow the Golden Rule: Don't be a dick. Any behavior that is deemed disruptive to the community will not be tolerated.

~ Roleplay locations can be ic'ly damaged. These are general guidelines and can be overridden with admin approval. The following is for Roleplay Locations only, any damage to private residences must be discussed prior: